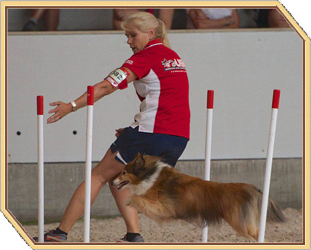 Diane Goodspeed started training dogs in 1992. Her first obedience and agility dog was a Lhasa Apso and her current competition dogs are two shelties, a Labrador and a Lagatto Romallo. Her first sheltie was Demon who placed 3rd at AKC Nationals in 2008, was on the AKC Agility World Team in 2010 and on the EO Team Sweden 2012 and Belgium 2013. Bizzy, her current competition dog, was on EO Team France 2016, EO Team Italy 2017, EO Team Netherlands and alternate for the 2017 AKC World Team. Diane also runs a BC and a Labrador, who just completed her PACH. As a full-time instructor, she has taught dozens of different breeds and sizes and has written multiple books on dog topics from hiking to competition mental management.